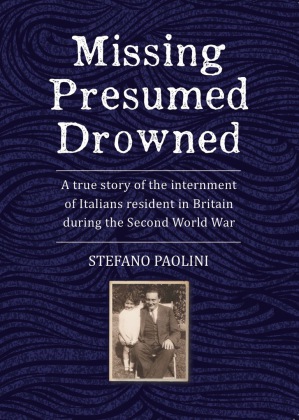 Missing Presumed Drowned is my debut book. I published it in 2015 and so far it's received eleven five star reviews by customers on Amazon.

On 10 June 1940, Italians living in Britain learnt the news they had been fearing the most.

Ten months into the Second World War, Mussolini’s Italy had entered the conflict on the side of Hitler’s Germany and declared war on Britain. Overnight, Italians resident in England, Scotland, Wales and Northern Ireland became enemy aliens.

In London, Leeds, Cardiff and Glasgow, Italian shops, cafés and restaurants were smashed and looted.

The British Prime Minister, Winston Churchill, was swift to act against the new potential threat from within and issued the order to arrest without charge and detain without trial every Italian man resident in Britain.

For thousands of first- and second-generation Italian men, this began an episode in their lives when they would languish for years in internment camps in the Isle of Man, Canada and Australia, until the end of the war.

For hundreds it would be the start of a chain of events that would see them ‘missing presumed drowned’ after their transport ship, the Arandora Star, was sunk by enemy torpedo in the Atlantic Ocean while en route to internment camps in Canada.

This is their story.